It’s the month of June! This is the same month that my feet will be stepping into U.S. soil. I’ve been recently stepping my feet away from my computer and taking in all that I can of Israel. This unfortunately means I haven’t able to dedicate as much time to my blog as I’d like to. But I’m currently sitting on a bus headed to Kibbutz Ketura (A kibbutz about thirty minutes from Eilat). Since the bus ride is about four hours I thought a nice activity to pass the time would be writing in my journal.

Last week was very busy for me. On Tuesday I attended the Israel Public Relations Awards (ISPRA) because the agency I am interning at won “Best International Campaign of the Year” for our client Shyne. I bet you’re thinking, “Who?! Shyne?!” But you may know more than you think. You can check out, and remind yourself of who he is, here. This past summer he was released from jail, went to Belize to shoot a music video, and around the time of Rosh Hashanah he came to Israel. He has been here ever since, making new music and studying the Torah. His grandma was an Ethiopian Jew and he grew up always identifying with Judaism. Since being in Israel however he has turned Ultra-Orthodox, and is now pimped out in full Haredi-gear. He used to look up to P. Diddy as a role model, and now he looks towards King David. He used to sing very inappropriately about women and now, he doesn’t even touch them.

The awards show itself was great, I got to see the brother of Ehud Barak speak. He is a very well-known PR guy in Israel. I also saw a former IDF spokesman receive an award. There was also a woman who was so into the awards ceremony that she was dressed in a medieval times style outfit.

At the end of the night some of my employees and I went out and had a lovely dinner together.

A day after the ISPRA awards was both יום הסטודנט and יום ירושלים. Both of these days celebrated Jerusalem and all the students living in Israel. In honor of the holidays a big concert took place in Gan Sachar park. It began around 9:15 p.m. and continued on until 8:30 a.m. It was also referred to as “לילה לבן” meaning “white night,” meaning you don’t go to sleep. As the night went on the music got better and the more popular artists took the stage.

While I had no idea who many of the musicians were, I still enjoyed being with my friends and dancing around. Around 5:30 a.m. however one of my favorite Israeli, and internationally well-known bands took the stage. Balkan Beat Box.

They were the last act of the night and boy did the best get saved for last. I had planned to see them one day in the States but to be able to see them perform in their home country speaking to their audience in their native tongue was quite incredible. As the sun was rising everyone was dancing around and you would have had no idea that we had all stayed awake through the night. 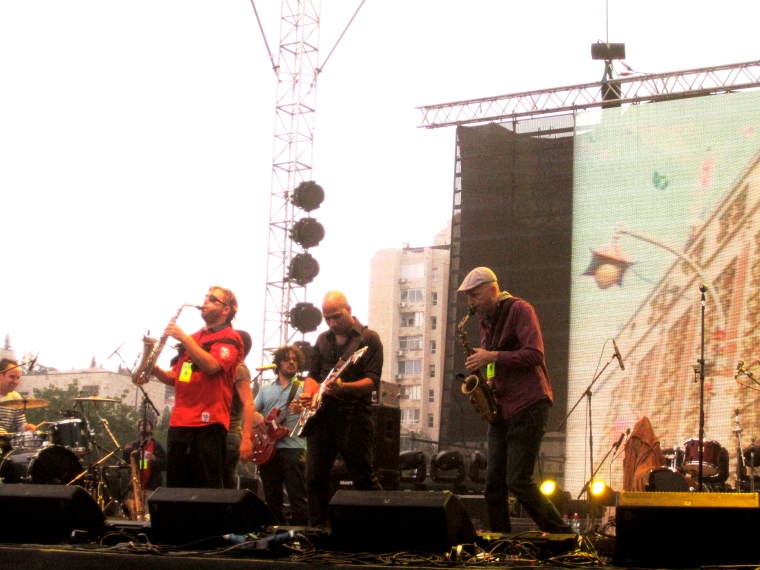 My roommates and I decided that one concert wasn’t enough. On Thursday we headed to Hadag Nahash, an Israeli hip-hop/funk band who performed alongside the Israel Symphony. It was the perfect blend of fast, get up on your feet dancing, mixed with some slow, intimate dancing. 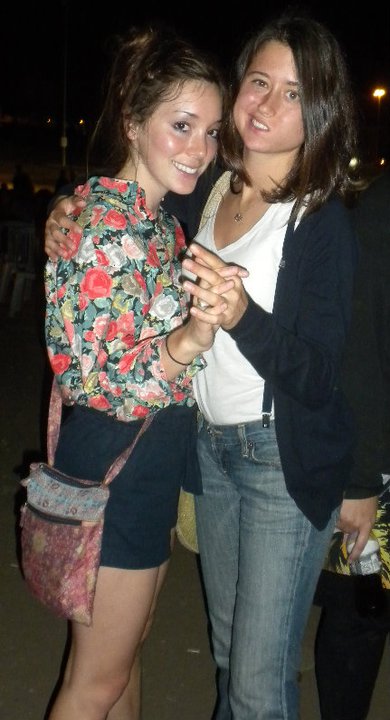 On Saturday night Tracy, my friend David, and I all made dinner together. We cooked a delicious feast of artichokes, salad, bread, and various dipping sauces of yogurt garlic, olive oil and balsamic. We also had some sparkling wine and a lot of laughter.

I’ve come to really enjoy the satisfaction of a meal when you put effort into cooking it, especially with your friends.

Today I am headed down to Eilat because Arava Power Company is holding a launch event for the first-ever built solar energy field in Israel and this region of the Middle East. Since I’ve been interning I have been helping with the public relations for the event. Hundreds of people will be there, including Uzi Landau, a member of the Knesset and the Minister of National Infrastructure for Israel. Also in attendance will be other Parliament party members, Shyne (he will be performing his new song that he created for the event), and a good amount of domestic and international media. It will be a long day, and I will be continuing on the trend of busy as I work with the media and try to get the best coverage possible. In the meantime I am going to stop writing in my journal now and go listen to some music. !! יום טוב

One thought on “June Has Arrived”